In honor of Glen A. Larson’s recent passing on November 14, 2014, I am running several reviews about books related to Battlestar Galactica, his most famous and greatest creation. 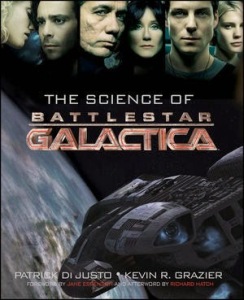 The word “science” comes before “Battlestar Galactica” in the title of this book, and I think that describes this book well. This book is heavy on the science. So don’t read this book if you have no interest in science! Fortunately for the reader, Grazier and Patrick di Justo do a great job communicating complex scientific ideas to lay audiences. If you’ve taken basic high school biology, chemistry, and physics classes, this book should be accessible.

The book is at its best when Grazier discusses his role on the show and how he devised plausible explanations for some of what we see in the show. For example, I’d always been puzzled how the Galactica could have survived a nuclear blast in the Miniseries, but Grazier provides a fairly convincing explanation. The section about Colonial technology is probably the best in this regard, touching upon the FTL drive, the lack of lasers, and other key aspects of the show. However, in other chapters, I felt like the show was merely a springboard from which to discuss the science rather than vice versa.

Grazier and di Justo frequently refer to BSG remake creator Ronald D. Moore’s “laws,” the first of which is that viewers shouldn’t get too upset about scientific inaccuracies because “it’s only a show.” Given how much they cite this refrain, I think the book would have benefited from a broader discussion about the role of science in science fiction. How do the authors believe science should be used? How would Grazier improve upon the writing process to avoid scientific mistakes? This certainly wasn’t a major problem with the book, but given the editorializing I’d actually have liked a more direct commentary on these issues.

Overall, The Science of Battlestar Galactica will help BSG fans appreciate the use of science in the show, so long as they’re willing to delve into some basic science. Think of it like a Battlestar Galactica-themed issue of Popular Science. I just wish we’d gotten a bit more about Grazier’s role behind the scenes.