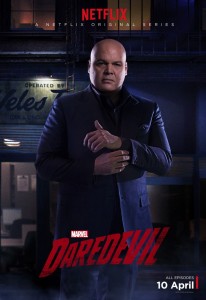 As I wrote last week, I enjoyed arvel’s Daredevil. Yet, as much as I liked protagonist Matt Murdock, I found the antagonist, crime boss Wilson Fisk (played by Vincent D’Onofrio), even more fascinating. This man is easily one of the most compelling characters in the Marvel franchise. Even as I loathed his actions, I also pitied him.

At first, I was skeptical about Fisk. The Marvel universe is filled with omnipotent, omniscient business tycoons who seek world domination. In the first three episodes of Daredevil, Fisk seemed to follow suit. Fisk apparently wants to raze Hell’s Kitchen and rebuild it. To achieve his aims, he works with drug dealers, killers, and the Russian mob. His minions refuse to state his name, building him up as some sort of faceless James Bond villain trope.

Fortunately, it turns out that Wilson Fisk is a fully developed character with his own passions and demons. The show explores Fisk’s backstory and secrets, which allows viewers to understand him, if not sympathize with him. He thinks he is doing right by himself and Hell’s Kitchen, even if he has to make some moral compromises along the way. He tries to protect his friends as much as he attacks his enemies. Fisk views himself as the hero of his own story, not as a mustache-twirling Snidely Whiplash.

It’s telling that Fisk is the only major character with a major romantic interest. He courts Vanessa Marianna, an art dealer. The romance has nothing to do with Fisk’s plans; it’s simply a love story. Fisk is clearly nervous as he tries to flirt with her. Near the end of the show, as police invade Fisk’s apartment to arrest him, Fisk desperately pulls out an engagement ring and proposes to Vanessa. If this had been a scene between the hero and his or her love interest, it would have felt like an overused trope; seeing the villain in that situation was jarring and touching.

It’s easy to get viewers to feel sympathy an antagonist who is clearly not evil (such as the Lannisters in Game of Thrones). Daredevil doesn’t simply abandon itself to moral ambiguity. Wilson Fisk is clearly the villain who engages in horrible acts of violence. Rage and violence boil beneath his calm exterior. The way he goes about achieving his goals is wrong (and a clear contrast to Matt Murdock).  Yet, without absolving Fisk of his crimes, the show explains the psychosis that created his behavior. Fisk grew up with violence and domestic abuse. Even as Fisk tells Vanessa that he doesn’t enjoy cruelty for its own sake, it’s clear he knows no other way.

Wilson Fisk is a great example of how a character can be both an effective villain and an effective character. I hope future Marvel projects take note.

2 thoughts on “Daredevil: Is it wrong that I like the villain?”